I’ve been a terrible blogger.  There have been 9 games that I’ve been to since last September that I didn’t blog, not including the two in the last two days, which will get proper blog posts.  Luckily, they’re all in the score book, so I’ll just run them down here for my own record keeping, even though I’m sure you don’t care.  (“You” being… my dad?  People who haven’t migrated from Google Reader yet?)  But if you read all the way to the end, you can hear me play clarinet on KQED, in a bonus thing-I-should-have-blogged-but-didn’t.

* Other thing I didn’t blog: I was in a workshop band performing selections from Beck’s Song Reader.  We were featured on KQED.  That is my clarinet solo you hear.  I’ve been asked to make an official studio recording in July.  Baseball related thing: You can hear Amal yell “Kirby Puckett!” at the beginning of Old Shanghai, letting me know that he made it to the gig  just in time.

My last game in Seattle I went solo — my Mom hadn’t decided to come along until after I had already purchased my 9th row behind home plate seat.  Unfortunately, it wasn’t the best game for being a Twins fan… other than two solo homeruns by Washington native Ryan Doumit, the Twins generated no offense.  By contrast, the Mariners scored three in the first, one in the second, and a fifth run in the fourth to more or less put the game away early.

But it was a gorgeous day for baseball and my view of the game couldn’t be beat.  Afterwards, I went up to the upper deck and saw Mt. Rainier, which was in full view for the first time all weekend.  Seattle — it’s a lovely town.  If only the Twins had decided to play a bit better, the weekend would have been perfect.

I nearly saw history last night… Felix Hernandez one-hit the Twins en route to a 7-0 victory.  Really, as far as the game goes, it was horrific for a Twins fan (me and my mother) and exciting for a King Felix fan (Amittai).  But we did have awesome seats, right behind the Twins dugout, purchased after a mini-adventure negotiating with scalpers.  As my mom put it, it really felt like we were watching a different game than last night.

Amittai also got me to do a thing I never do, which is leave my seat during the game.  We went and walked around the upper deck to see the views of the Seattle skyline — it wasn’t clear enough to see Rainier, but the sunset just past the Space Needle was nice.

And for those who might be curious, Amittai and my mother got along just fine.

Given the week they’ve had (i.e. they were no hit in their last game and hadn’t scored a run since Monday), I’m extra excited at having attended a win tonight. I got up this morning and flew to Seattle where my mother was already waiting for me — after having herself quite the adventure last night. (My mom is, uh, not a seasoned traveler. But she managed not to go to the hospital, so that’s something.) We headed out to the game early to check out some batting practice and get out of the rain.

That’s right, we went to the game to get out of the rain — because Safeco Field has a retractable roof. And actually, as far as ballpark roofs go, this was by far the best one I’ve ever seen, because it’s only a roof and there are no high walls. It doesn’t seal up the ballpark and the fresh air still comes in from outside.  (By the middle of the game, I might have been a little bit wishing that the air was less  fresh.)  Two thumbs up from me — plus the oyster po’boy was pretty delicious.

And as an added bonus, we were treated to a pre-game concert by Mike McCready, lead guitarist of Pearl Jam, who played the national anthem Jimi Hendrix style… and I recorded it for the Internet to enjoy, missing the first phrase:

And then there was the very excellent  game that The Twins Won!!  In particular, the 7th inning when they scored three runs on a Parmelee double, two walks, a fielding error, a fielder’s choice, and a Joe Mauer single.  It wasn’t exactly an offensive juggernaut, but it got the job done as Carl Pavano and the Bullpen (new band playing covers at the local bar?) held the Mariners to only two runs.  Matt Capps even came and pitched a 1-2-3 9th inning with two strikeouts.  It’s a Star Wars Day miracle!  (May the fourth be with you…)  Maybe they can do it again tomorrow when I attend a game with my mother and Amittai? 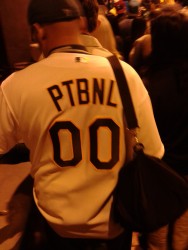 I volunteered to help run a curling clinic this afternoon, and because I was on that side of the Bay anyway, when it was over I headed over to O.co Coliseum (possibly the most terrible stadium name ever) to catch the second home game of the Oakland A’s season… because in Oakland, the seats are always cheap and plentiful.  (Today: $10 from a scalper for tickets that are $16 face.)

And why are A’s tickets so cheap?  Well, because they tend to trade away players once they start to get expensive (see awesome jersey for Player To Be Named Later I spotted while leaving the game) and because the team’s not that good.  Which they mostly proved by going down 7-0 after the top of the 4th inning.

But then, a funny thing happened… those scrappy little Moneyball players started to crawl their way back.  First with a manufactured sac fly run in the bottom of the 4th and then a solo shot from Jemile Weeks in the bottom of the 5th.  (Weeks is really fun to watch by the way… some big pocketed team will probably snatch him up in a few years, sadly.)  Then they scored two in the 6th off a Kurt Suzuki double that nearly cleared the wall in left and got every one cheering, but they were still down 8-4.  In the 7th Yoenis Cespedes launched a three run bomb to deep center to bring the A’s within one and the crowd — all half-dozen or so that were left — went nuts.  I briefly thought about how amazing it would be if the A’s could actually come back and win…

… but they didn’t.  Of course they didn’t.  The only remaining highlight after the Cespedes homerun was the bunch of balloons that first floated out of the stadium at the end of the 7th and then apparently lost buoyancy as they came back into view in the 9th.  They floated around awhile, nearly landing in center field prompting an usher to run out and jump in the air manically trying to grab them.  Eventually they floated over to the left field seats where another usher retrieved them.  And so ended the balloon drama… and more or less the game.