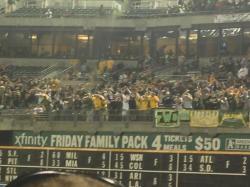 Okay, at the suggestion of my father (and after all, it’s Father’s Day, so I ought to listen), I’m going to attempt to blog once a week, on Sunday nights.  And this is a good week to start, since I went to a baseball game on Tuesday… and life got in the way of writing about it until now.  The New York Yankees came to the Bay Area this week, and my friend e-mailed asking if I wanted to take in a game.  As long as he wasn’t a Yankees fan, I was down.  (He’s a Dodgers fan — I never know where NL fans loyalties lie in the American League.)

A funny thing happens in Oakland when the Yankees (or Red Sox or Giants) come to play… the Coliseum gets over run with away fans.  There are a large amount of New York (and Boston) transplants in the area, and Oakland tickets are cheap.  Last season when I went to see the Red Sox on the 4th of July, the Coliseum looked a little like Christmas with all the red in the green seats.  But even when Yankees or Red Sox are in town, there is one section of the stadium that remains rabidly loyal to the A’s — a section I have previously never sat in because I wasn’t sure I had the stamina:

All of the crazy things you hear about happening at the Oakland stadium: Jeff Francoeur sending pizzas and starting a bacon tradition, the drumming, the Bernie Lean, and Balfour Ragin’ all started in the right field bleachers.  These guys take being an A’s fan seriously.  So obviously, this is where we decided to sit to avoid the incoming glut of New Yorkers.  By some miracle, we managed to finagle a pair of seats in the second row… and by the 8th inning, someone left and we jumped up to the front, where taking part in the traditional festivities, like standing during the wave so as to stop it, was a requirement, not a suggestion.

So, while a non-trivial proportion of the rest of the stadium didn’t seem to be quite so excited when Coco Crisp started off the bottom of the 1st with a solo homerun, or watching Derek Norris go deep in the 4th inning, our section was having a blast.  C.C. Sabathia, who just might hold the record for the most pinstripes of any Yankee ever, gave up 6 runs over six innings while Bartolo Colon pitched six innings of shutout ball.  The final score may seem close, but it never felt that way.

At one point, we discovered that another mutual friend of ours was at the game.  And he saw us Balfour Raging in the front row of the bleachers in the 9th inning and snapped a picture.  (With his cell phone, so you’re just going to have to believe me when I tell you that one of those blurry people in a yellow A’s jersey is me.)

END_OF_DOCUMENT_TOKEN_TO_BE_REPLACED

As is probably unsurprising, what with my gushing over Justin Verlander, the Tigers are my team this post-season.  What is probably also not surprising, the New York Yankees are the one team of the eight postseason teams that I can’t stand and want to see lose and lose quickly.  Then there are the six other teams which I am mostly indifferent to.  If I had to rank them it would probably go Brewers, Diamondbacks, Rays (well, they’re already out), Rangers, Cardinals, Phillies.  But really, as long as there is good baseball played, I’m not invested in who advances out of those six teams.

And so that leaves me with one divisional series I watched every pitch of: The Evil Empire vs. the Guys From Near My Old Stomping Grounds Who Have The Best Pitcher In The Game In Their Pen And Delmon Young.  (Hmm… that is a long moniker for the Tigers.  I should shorten it to GFNMOSGWHTBPITGITPADY, although even that is longer than “The Evil Empire.”)

Game 1 got postponed after an inning and a half, ruining the Verlander vs. CC Sabathia start and turning it into an Ivan Nova vs. Doug Fister disaster on Saturday.  Game 2 featured some brilliant pitching by Max Scherzer.  Game 3 featured some not-always-brilliant-pitching-but-who-cares-because-he-won from Justin Verlander.  Game 4 was really ugly and I’ve wiped it from my memory.  Game 5 was a stressful game because even though the Tigers were never behind (and after the second batter of the game were always ahead), it was never a big lead and with the Yankees, I can really only relax when it’s a big lead.

After A-Rod struck out to end the game, I was finally able to exhale.  The combination of wanting the Tigers to win and wanting the Yankees to lose was enough to make me tense whenever I watched it — and exhilarated when the Tigers finally clinched it.  That exhilaration is why I watch baseball.  It’s certainly not for the anxiety that comes before it… but the anxiety is a necessary precursor to the joy.

For better or for worse, now that this ALDS is over, I don’t think I’ll be getting as emotionally invested in the ALCS or the World Series.  The Tigers aren’t really my team and they’ve already vanquished the team it’s fun to watch lose.  (Seriously… click the link to watch A-Rod strikeout.  It’s just so satisfying if you know anything about him — plus Avila’s glee is infectious.  If you’re unaware of why Rodriguez is a guy it’s fun to root against, let this Google image search be your primer.)  For the remainder of October, I’m going to be a lot more relaxed when I watch baseball.

But it also means I won’t be as elated when the Tigers take it all as I was tonight.