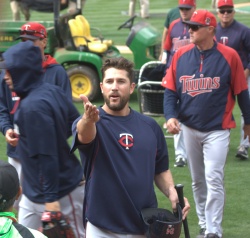 I spent the bulk of my weekend at the O.co Coliseum in Oakland to see the Twins come to town instead of back in Minnesota for the annual family gathering at the cabin… because I have my priorities straight.  While I would have liked to have seen my extended family, particularly my cousins’ kids who I don’t see often enough, apparently they were able to see me on Saturday night, as I made it on the broadcast while Jack Morris rambled on about being in the Minnesota Lottery Winner’s Circle.  The friends I had gone to the game with had all left me to babysit the bobblehead dolls¹ and it was between innings and thus, I was looking down at either my scorebook or my phone the entire time.  Apparently this caused my grandmother to yell at me from all the way back in Minnesota, but unsurprisingly, I did not hear her and did not look up at her.

When @jenlperez, Meghan & Jim went to get food and left me alone, this happened. h/t my Mom for telling me about it. pic.twitter.com/971EHRx6sH

Getting on TV might be the personal non-actual-baseball-game-related highlight for the weekend, except that, also on Saturday, Trevor Plouffe tossed me a baseball during batting practice.  In fact, he tossed me two as the first one was intercepted by a kid in A’s gear that dove in front of me.  For the second time, wearing the away team’s jersey got me special recognition as the second baseball he tossed me, he announced was for me specifically.  My friend Jen Perez, who was standing behind me at the time, actually got a picture of him flipping me the baseball with her DSLR, as opposed to the picture I took of the baseball itself from my camera phone.

As I didn’t bother bringing my good camera to the park for any of the four games I went to², all of the pictures in the gallery below were taken by Jen.

As for the baseball itself… it was the team with the best record in baseball against the Twins. I think the Twins were lucky to take one (on Sunday). Here’s the bulleted recap of the four games:

¹ – It was Tony LaRussa bobblehead night on Saturday. As I remarked on twitter, the bobbleheads looked more like Kent Hrbek than LaRussa.
² – I still have hundreds of photos to go through from my recent trip to Denver with my parents to see the Twins take on the Rockies, which, uh, I should blog about. Also my trip to New York to see the Twins against the Yankees with Anand. I think I missed a random Giants game in this long stretch of a non-blogging summer too.