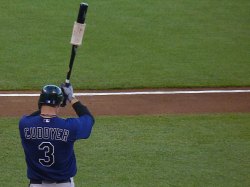 For 11 seasons, Michael Cuddyer played for the Minnesota Twins at nearly every position, save for catcher and shortstop.  (Yes, he even pitched one scoreless inning during a blowout loss to the Texas Rangers.)  But, as the baseball economy goes, when Cuddyer was up for free agency last off-season, the Twins couldn’t afford to keep him and he was off to tap the Rockies (for more money).

This past Monday, I saw him in his new uniform and new number (3, for Harmon Killebrew) when the Rockies came to San Francisco to play the Giants.  While Cuddyer went 0 for 4 on the night (just missing a grand slam in the third by about 10 feet), the game itself was well worth the price of admission.

Scoreless for three innings, the Rockies struck first with a solo shot by Wilin Rosario to lead off the top of the fourth.  The Giants struck back in the bottom of the 6th went Gregor Blanco went yard to right.  The scored stayed tied at one until the bottom of the 8th when Blanco singled followed by an odd “Sac, E-2” by Joaquin Arias to put runners on first and third.  After Melky (not Miguel) Cabrera sac flied to left to score Blanco, fan favorite Buster Posey singled to center to score Arias, giving the Giants both the lead and insurance run that made fruitless the Rockies run in the bottom of the 9th.