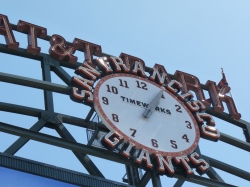 In an attempt to balance my Bay Area allegiances, today I went to my first regular season Giants game during their home opening weekend, much like I did with the A’s last week.  It also happened to be Jackie Robinson Day today, when all players wear 42 in honor of the anniversary of Jackie Robinson’s major league debut, breaking the old Gentlemen’s Agreement that kept blacks out of Major League Baseball.   (Of course, I wouldn’t be me if I didn’t mention that Robinson wasn’t actually the first black man to play in the majors.  That honor goes to fellow Michigan alum Moses Fleetwood Walker… although Wikipedia is telling me I might be wrong there.)

Much like last week, the home team lost to a team of seafarers, but this time it was Pirates instead of Mariners.  But the weather was nicer and there’s no denying that it’s just more fun to be at a full stadium with that gorgeous open outfield showing off the sky and the bay than in a mostly empty bowl in Oakland.  On the other hand, no player ever delivers pizza to the AT&T bleachers.

Today I sat (pizza-less) in those bleachers and found myself talking to a couple of fans who were fascinated by my scorebook.  They’d never seen anyone keep score before and they wanted to know how it worked, what the rules were, and why shortstop is 6 and third base is 5 when they don’t play in that order around the infield.  Also, when the Pirates scored their 3rd and 4th runs, they asked if I could just leave that out of the record and make it official… tempting, but no.  Their four year old also seemed interested… for about 10 seconds and then he just wanted a sno cone.  And then he wanted a nap, so he slept on his mom’s lap.  Nothing cuter than a kid with rainbow colored sticky stuff all over his face and hands, wearing a mini Buster Posey jersey, curled up in a ball.

Sitting behind me was a pair of couples on a double date… and I’ve discovered my new pet peeve: guys who try to explain the rules of baseball to their dates and get the rules wrong.  (The runner didn’t take off even though it was a fly ball to the outfielder because of “The Sac Fly Rule” — he took off because there were two outs.  He would have had to tag on a fly ball.)  What’s worse, when the guys left to go get beer, the women suddenly started talking about the game like they’d been watching for years, which I suspect they have.  They probably didn’t need their dates to explain to them that “bases loaded” means “the Giants have a runner on every base.”  And yet, they seemed pretty grateful when that happened.

The game itself was owned by the Pirates pretty early on when Garrett Jones launched a homer to right in the top of the 2nd.  They scored another run later in the inning on a series of singles, and never really looked back.  The Giants tried to squander a Brandon Belt lead-off double in the fifth, but two ground outs later and Belt was crossing home plate as the ump was calling the second out of the inning.  They were more successful squandering Angel Pagan’s lead-off triple in the 8th.  Once that happened, the stadium started to thin out and sure enough, there was no rally in the 9th.

Pictures and such in the slideshow…