Because I didn’t feel like playing hooky for tomorrow’s day game, I opted to go to the second to last regular season game of the year tonight at AT&T Park.  And what a night it was… two homeruns, each extraordinary in their own way, Tony Bennett, a home team victory, and two foul balls in the row in front of me.  The latter events resulted in me being on TV (again), which I screen grabbed from the archived game on MLB.tv.  What makes it really impressive is that we were in the third deck. 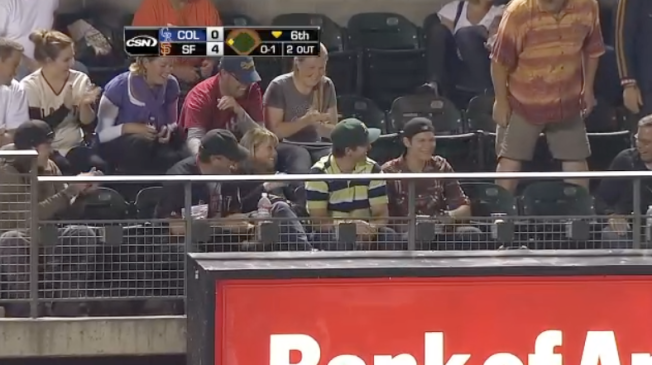 That's me in the gray shirt behind two guys who caught foul balls tonight. We're all laughing at the guy in the red plaid shirt because he just tried to "fight" the guy on the left (with his wife) for the ball even though he already had one from two innings earlier.

But most people weren’t at the game to watch the people in front me catch foul balls. They were there to watch the Giants win a game… which they did in spectacular fashion.  Madison Bumgarner did much better than he did against the Twins (when he gave up 9 runs in the first) by pitching 7 shutout innings.  But it was the Giants offense that really shone.  In the 4th inning, Brandon Belt did something I had never seen in person — he hit a two-run splashdown homerun out of AT&T Park and into McCovey Cove, putting the Giants up.  And somehow that wasn’t even the most exciting homerun of the game.  In the 7th inning, with the Giants already up 5-0 and a runner on first, Conor Gillaspie hit a ball into the odd corner in center field known as Triples Alley.  Only he didn’t hit a triple.  He rounded third, slipped and fell, picked himself up, kept going, and still beat the throw to the plate for an inside-the-park homerun.

But the biggest celebrity at the ballpark wasn’t a ball player.  Tony Bennett, whose voice serenades AT&T Park after every Giants game singing “I Left My Heart in San Francisco,” was in attendance promoting his new Duets II album.  There was also a Tony Bennett bobblehead doll giveaway, but I didn’t realize this beforehand and wasn’t even close to early enough to get one.  I did, however, get a video of Bennett singing “God Bless America” during the 7th inning stretch… so I will close my regular season baseball going experiences with that.